Small One is one of the first projects Don Bluth was in charge of. It is a short film made by Disney and centers around a donkey named Small One. You don't have to look far to see how Small One got his name, for he is very small compared to the other donkeys. Because of Small One's size, he cannot perform the quality of work that is required of him. Although he is loved by his master's unnamed son, he provides little reasons to be kept. His master decides that Small One must be sold which greatly troubles his son. When he explains his reasoning, the son volunteers to take Small One into town and sell him to make sure he goes to a good home. The father agrees and the rest of the short follows the son's day in town and finding Small One a home.
I really liked this short. I didn't love it because there were a lot of problems with it but for what it offered I found it to be very solid. One thing I appreciated was that the film revolved around a biblical story. Usually Disney shies away from out right recognizing any religion and goes with cultural/social norms of the day. It is no surprise to me that Bluth was involved in this project as it is widely known that Bluth like taking Disney in uncomfortable territory (not a bad thing) and ultimately left Disney because they played safe instead of making quality films. One of the films Bluth worked on was The Fox and the Hound which is a cute film and one I adore but not necessarily a good product. Bluth went on to start his own animation studio and dabbled in more controversial areas. He came back to a religious theme with his film All Dogs Go To Heaven.
Of course it isn't just the theme that makes it a good short but the quality story telling that goes on. Bluth sets up a very biblical and literary plot by taking common ideas like the number three and anonymity and using them to not only advance the plot but artistically depict the story. For example, the son goes through three trials to find Small One, a home - the first being the encounter with the man who kills animals for their fur, the second being the people in town (specifically the auctioneer), and the third being the shepherd. Then there is the anonymity theme which I love. Or may be 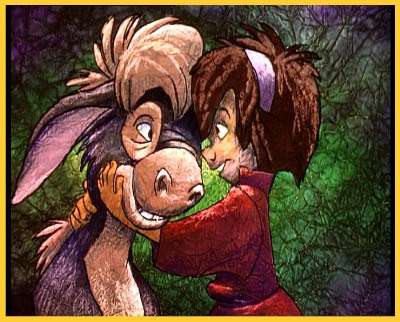 anonymity is the wrong word and perhaps the right phrasing would be that the film is allowing the audience to put the pieces together. They aren't spoon feeding the audience. It is obvious from the character design and the presence of the donkeys and the animation of the setting that this story is biblical. It probably was also obvious by the time of year it was released. I'm completely unaware how Disney marketed the short but I'm guessing it played on ABC at least once during the holidays. Anyway, keeping all of that in mind the short never once tells us who the shepherd is that ends up buying Small One. Everything is implied through visuals which I found to be very clever.
I guess my biggest problem with the short was the center part when the son is trying to sell Small One. There is a continuous song being sung through these scenes partially by the son and partially by three men who seem to represent the greed that exists in the world. Don't get me wrong, this idea appeals to me since Christmas has become very greed ridden but I'm not sure we were so aware of the greed when this short was made. However, whenever these three men sang I just wanted to fast forward. They were annoying and not very well set up...and borderline racist. I'm not sure what could have been done differently to fix this but it was just something that bothered me.
Overall, the short was really cute and well thought out. The characters were pretty generic and others outright annoying. The pacing in the middle became a bit of an issue and the music never stood out. While the animation was simple grade B/C quality, I have to give the studio and Don Bluth credit for the effort. It definitely captures the quality of old school Disney and you can tell they are still trying to find their place after Walt's death. I would definitely recommend this short to you.
Be sure to watch the short HERE and listen to our new Christmas themed episode of Talk Magic to Me where we discuss Mickey's Christmas Carol.
Danielle at 3:14 PM
Share